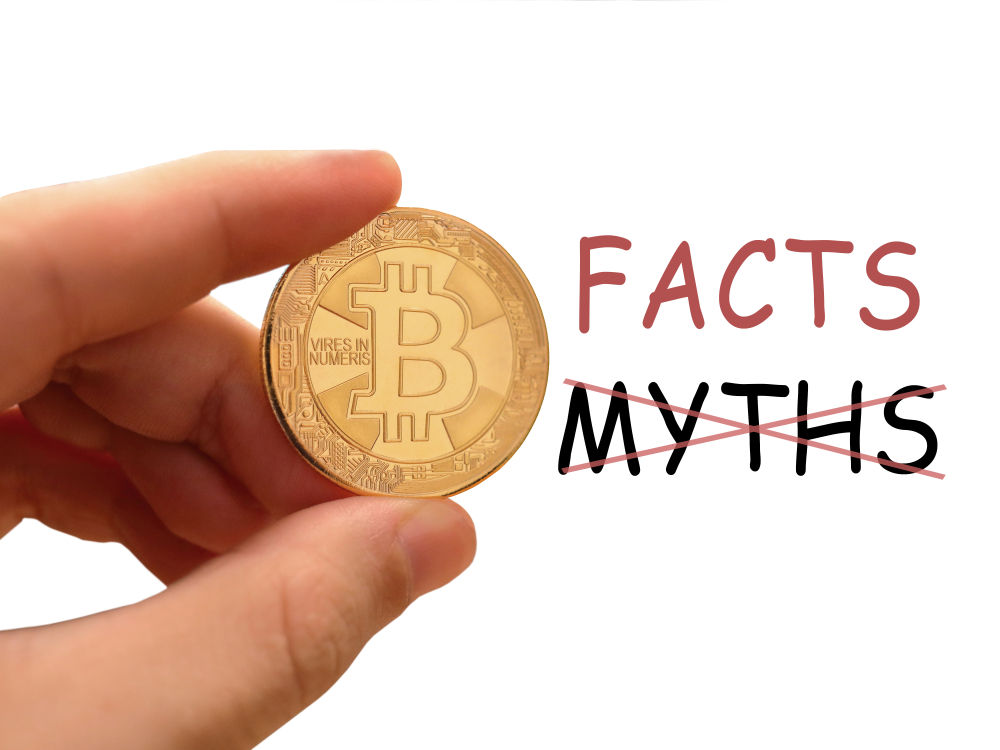 Initially launched in 2009,  Bitcoin has experienced a significant boost in popularity over the years. Along with the popularity comes the bitcoin myths and conspiracy theorists. A new area of investment, Bitcoin has prompted analysts and potential investors to ask several questions about the authenticity of the digital currency. Therefore, if you believe that Bitcoin is either too unstable to be used in the real world or its value is “based on nothing,” this article is for you. Read on to learn about some of the biggest Bitcoin misconceptions and myths in today’s world.

Bitcoin Myth 01: Bitcoin Is Not Good for the Environment

All forms of the digital economy require energy, be it the electric supply needed to power office buildings, local bank branches, ATMs, or the energy required to operate the entire global banking system efficiently. Therefore, with Bitcoin taking over the world, the cryptocurrency’s impact on the environment has increased. It is believed that Bitcoin mining being an energy-intensive process can have a disastrous effect on the environment.

According to recent research conducted by a New York-based fund Ark Investment Management, Bitcoin is much more energy-efficient globally than the traditional banking system and gold mining. This is mainly because a significant portion – around 20% to 70% – of Bitcoin mining is powered by renewable energy resources (including solar, hydro, and wind). Cambridge researchers dispelled the myth by stating that “Bitcoin’s environmental footprint currently remains marginal at best.”

Although the extensive Bitcoin network has never been hacked, many computer scientists and security experts have scrutinized its open-source code. Here are two things that you need to know about Bitcoin:

Most of the misconceptions about Bitcoin’s anonymity and security stem from digital invasions on third-party organizations that only use Bitcoin as a form of digital currency and not the Bitcoin network itself. Significantly, the recent high-profile hacks on Bitcoin-based companies such as a Japan-based exchange Mt. Gox and the data breach at Ledger have left thousands of people questioning Bitcoin’s security system.

Since its launch in 2009, Bitcoin’s core protocol security operations have functioned with 99.9% uptime. The globally distributed Bitcoin network is secured by high-power computing systems and uncountable nodes in 100 countries operated by Bitcoin miners worldwide, meaning that there’s logically no chance of a security failure in the vast Bitcoin network.

Being a new, young, and growing market, Bitcoin has experienced significant value volatility over the last ten years. Whether it was the Bitcoin genesis block in 2010 that gained a long-term value and market capital of more than $1 trillion or the Bitcoin network maturing to a robust regulatory structure worldwide; the digital currency has attracted a wave of institutional investment and is being used by renowned organizations like Hedge Funds and Tesla.

Though there is still no guarantee about the future standing or performance of Bitcoin vs Ethereum, its long-term trend line and value over the last decade has been flourishing. One wise strategy to reduce the impact of the volatile Bitcoin environment is by investing a fixed amount every month or week regardless of the market’s standing (value).

Whether it’s Bitcoin or any other digital currency, your investment portfolio depends on three things; investment time horizon, risk tolerance, and personal circumstances. And even though Bitcoin has trended upwards in the last years, it has also faced substantial down cycles. Therefore, Bitcoin investors should consult with financial advisors and carefully navigate the volatile market before making major financial decisions.

Bitcoin’s value isn’t based on a physical asset like the fiat currency, US dollar, or gold. Instead, it is hardcoded, which makes it resistant to volatility and market inflation. The value of fiat currencies tends to inflate when created in large quantities, diluting the present supply.

With a scarcity of 21 million, the value of Bitcoin mining is declining over the years. Such that, every four years, the event of “halving” takes place in which the blockchain bonuses paid to the miners are distributed in half. Ensuring that the Bitcoin value is trending upwards while the overall supply is being maintained based on the economical principle of scarcity. Moreover, Bitcoin miners are rewarded with a new Bitcoin for operating powerful computers that supply a large amount of processing power to secure and validate every transaction.

Bitcoin is one of the most successful and popular digital currencies. Although new cryptocurrencies comprising the latest advancements and features have tried to take over, none of them have succeeded.

Although hundreds of digital currencies have been launched over the years, Bitcoin still makes up 60% of the digital currency market. This is because of two reasons; Bitcoin is the first mover and its mission statement of being an open and decentralized currency. This means that instead of one central authority, Bitcoin is globally operated by a community of nodes and miners. So, even for something as simple as fixing a bug or as complex as launching a new upgrade, 51% of the community must support the clause for the change to happen. Although many people have tried creating Bitcoin clones or revival cryptocurrencies, given the current circumstances, the replacement of Bitcoin anytime soon seems impossible.

Bitcoin Myth 06: Bitcoin Has No Uses in the Real World

Critics not only claim that Bitcoin has no uses in the real world, but they have also stated that Bitcoin is primarily used to finance illicit activities. However, neither of the statements is true. Throughout time Bitcoin has been used to make payments worldwide, without the need of a payment processor or bank in the middle. Not only is this, but Bitcoin is also used like gold to secure investments.

Similar to gold, Bitcoin has gained popularity as an inflation-resistant store. Also known as “digital gold,” several renowned companies like Square, Tesla, and Microstrategy have bought millions of Bitcoins to manage their investments.

Bitcoin Myth 07: Bitcoin Is a Bubble

Bubbles in financial terms can be defined as economical cycles characterized by unstable rises in the market value.  Though most people believe that Bitcoin is a speculative investment and that they will get big returns, it doesn’t label it as a bubble. However, the moment investors realize that the Bitcoin prices are much higher than the fundamental value of their assets; the Bitcoin bubble pops.

Over the last 12 years, Bitcoin has been through several price cycles and has successfully recovered every time. More bust and boom price cycles are expected with the evolution of technology. However, the Bitcoin investors predict that the Bitcoin oscillations will soon form a typical pattern leading to stability in the future. Remember: Investment in Bitcoin isn’t a get-rich scheme. It’s an investment, just like commodities, mutual funds, and gold. So you must do your own research and weigh the pros and cons before investing

Bitcoin vs Ethereum: Which Is a Better Buy?

Bitcoin vs Ethereum: Which Is a Better Buy?